Duni is creating a new organization based around five business areas with the aim of focusing on profitable growth. The goal is increased customer focus and market segment specialization within the new business areas.

“Duni has created very strong positions on the traditional restaurant market in Europe over the past few decades. However, growth in this market has been low for several years,” says Thomas Gustafsson, CEO, Duni.

“At the same time there are other segments in the European market that are growing quickly, for example fast food, cafés and take-away. In addition, there are many geographic markets outside of Europe that are experiencing annual growth in the double-digits.”

In order to better take advantage of the growth possibilities in the above fast-growing markets, the Professional business area is now being split into three business areas:

The current Consumer business area, which targets the consumer market primarily in Europe, will remain unchanged.

As a consequence of the new organization, the financial statements will be affected in that income and expenses and assets and liabilities will be broken down into the new segments starting in 2014. However, Duni's consolidated numbers will not change. The financial information for 2013 will be recalculated and reported in conjunction with the interim report for Q1.

Duni’s new organization consists of the following five business areas as of 1 January 2014: 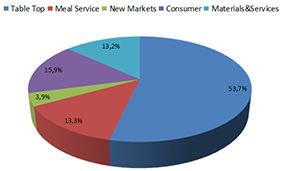